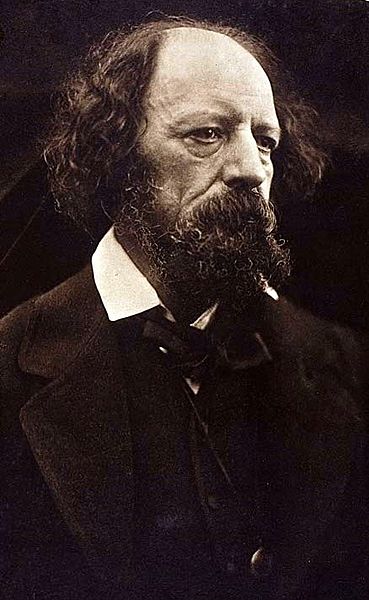 It would be difficult to overstate the popularity and celebrity that Alfred Lord Tennyson enjoyed in his lifetime, in a career that spanned the length of Victoria’s reign, and which amounted to a veritable industry. His poetry was published and read widely by a mixed readership, and his likeness was recognisable from drawings, photographs and cartoons.

Alfred Tennyson was born in Somersby, a Lincolnshire village, on 5th August 1809 to a clergyman, George Tennyson, and his wife, Elizabeth. He was the fourth of 12 children, one of whom died in infancy. The household was creative: all wrote and read poetry, and played music together. Various members of the family appear to have suffered from health issues including severe mental illness, epilepsy, heavy drinking and drug addiction; these seem to have had their effect upon Alfred, who suffered from periods of considerable fear and anxiety about his own physical and mental well-being.

Tennyson studied at Trinity College, Cambridge, where he joined the Apostles Club, making several strong and lasting friendships, and writing and discussing poetry with his peers. He formed a deep bond with Arthur Henry Hallam in an intense friendship lasting for four years until Hallam’s early death. It was a relationship that left a profound and far-reaching impact on the youthful Alfred, his verse and his life. The ‘In Memoriam’ elegies, now considered by most to be his best work, were written as a response to his grief at Hallam’s untimely and sudden death. While the relationship was not avowedly homosexual as we would now understand that term, such close, loving male friendships were not unusual for the culture in the period. At the time of the publication of ‘In Memoriam’, many reviewers and other readers, famously including the queen (who found consolation in it on the death of her husband, Prince Albert) made no objection to the poem’s address to a young man as beloved. It was written within the parameters of a recognised poetic form; indeed, some of Shakespeare’s love sonnets had been addressed to a young man.

Tennyson and Hallam travelled together in France and the Spanish Pyrenees, assisting Spanish rebels in their cause against a reactionary Spanish monarchy. Homosocial bonds were further strengthened between the pair when Hallam became engaged to Tennyson’s sister, Emily. In 1830, Hallam introduced Tennyson to another Emily, Miss Sellwood, whom he would later marry. Alfred left Cambridge shortly after the death of his father, without taking the degree, in 1831. His engagement to Emily was initially broken off by 1840, apparently because of her father’s disapproval.

A period of a decade between 1840 and 1850 during which Tennyson did not publish any poetry is often referred to as the 10-year silence, yet he was still writing and redrafting. During these years it is documented that Tennyson spent much time depressed, and receiving the then fashionable, now infamous, ‘water-cure’, or hydropathy, which Charles Darwin, among other Victorian luminaries, would endure in the hope of improving their mental and physical ill health. In 1845 Tennyson was granted a Civil List Pension of £200 a year, helping to relieve some financial insecurity.

After a long engagement, even by Victorian standards, he married Emily Sellwood on 13th June 1850, in a very quiet and private service, in a vicarage at Shiplake, near Reading. He was now 40, and Emily 37 years old. Their honeymoon in the West Country included a visit to Arthur Hallam’s grave. The following year their first baby, a boy, was stillborn. Their second son, Hallam, was born in 1852, and the third, Lionel, in 1854.

Following William Wordsworth’s death in 1850, Tennyson succeeded him as Poet Laureate. In the Victorian era this meant writing about events in the royal family as well as national occasions, and in this collection this gives us ‘Ode on the Death of the Duke of Wellington’. Hallam Tennyson died of a fever on a return sea journey, in April 1886. Alfred Lord Tennyson died at Aldworth on 6th October 1892. His funeral was held in London and he was buried in Westminster Abbey in October 1892. His son Hallam and his daughter Emily wrote Tennyson’s Memoir and it was published in 1897, a year after Emily’s death.
Show / hide details

Conflict: Poetry Anthology Activity Pack for GCSE Edexcel
Explore your chosen collection of poems with this student-friendly pack. Structured pre-, post- and during-reading activities for each poem cover everything you need to tackle the collection in class, for homework or as revision. 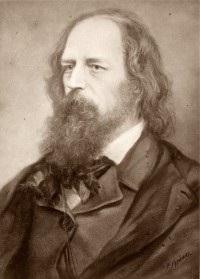 Alfred Lord Tennyson's Poetry: A Comprehensive Guide for IB
Language A: Literature, Part Two: Detailed Study
The most prevalent poet of the Victorian age, Tennyson was the master of descriptive writing, rich imagery and eloquent lyric. Dip into his classical and mythological verse with this informative and stimulating guide. Focused assessment practice helps ensure your students are fully equipped for the Part Two oral commentary!

Alfred Tennyson: Poetry Recordings (AQA B Literature Selection)
Professional recordings of well-loved poetry to breathe life into study and fully engage students with the subtle complexities of the art form. Provided on CD, these readings can be played in class or uploaded onto a VLE. Familiarise students with key aspects of poetry including metre, rhyme and rhythm Beautifully read aloud by experienced West End actors! Recordings include female and male readers and Scottish, English and American accents where possible.