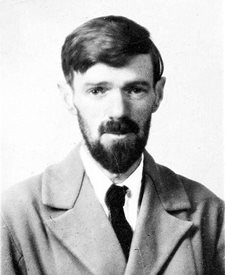 David Herbert Lawrence was born in 1885 at 8a Victoria Street, Eastwood, in a modest house (which is now a museum). Eastwood was a mining town and Lawrence’s father, famously, was a miner. Part of Lawrence’s upbringing was a certain division in the family between his relatively uncultured father, Arthur Lawrence, and his mother. Lawrence’s mother, Lydia, came from a poor but, in cultural terms, a more middle class background. Some of the opposites in the marriage seem to have become themes in Lawrence’s writing. The themes include the physical versus the intellectual, ‘working class’ versus ‘the genteel’, and passion versus self-control. According to the critic F R Leavis, D H Lawrence shows a profound awareness of class in many of his English stories.

The family had many other dynamics. D H Lawrence, known as ‘Bert’ in the family, had two sisters, Ada and Lydia, and two brothers, Ernest and George. ‘Bert’ was the third son, and while just one of the children who enjoyed his mother’s strong parental affections, his attachment to his mother was close and intense. In 1901, Lawrence’s much loved brother Ernest died tragically and suddenly from an acute infection.

Lawrence’s first published works were poems, published in a literary magazine, The English Review. He was identified by many readers with the ‘Georgian’ poets, a group identified as having a common concern to portray the natural world and the countryside. Such a concern is evident in Lawrence’s first novel, The White Peacock, which also concerns a relationship with the girlfriend who first sent his love poems to The English Review.

Lawrence was in many ways ‘bohemian’ and unconventional. He was even suspected of being a spy in Germany and in England during the First World War. The major partnership of his life was with Frieda, a German aristocrat six years his senior, and, when he first met her, the wife of his professor at Nottingham. Lawrence and Frieda eloped in 1912.

Lawrence was very critical of modern industrial society and democracy, and he showed a lively interest in other cultures and archaeology. After leaving England in 1919 he moved to Italy, and then Australia. During his life he also lived in the South West of the USA and Mexico.

Lawrence’s reputation varies. One might use the ‘marmite’ metaphor, not only because much of Lawrence’s work is ‘strong stuff’, but also because he has occasioned praise and dispraise sometimes in equal measure. During his own times he had a controversial and growing reputation, and his work was noticed in many countries beyond Britain, published in the USA, Australia and Europe. The morality of the times in which Lawrence lived, and subsequently, has meant that his attitudes to, and portrayal of, sexuality have been misunderstood and misrepresented. During his own time, much of his work caused outrage, not only with the authorities and the police. Even in the 1960s Lady Chatterley’s Lover, for example, was the source of much controversy, not least because of a famous trial regarding its suitability or otherwise for publication. However, Lawrence has enjoyed more success since his death.

All his life Lawrence loved, wrote about, used flowers in his work. Towards the end of his life he wrote a poem about the blue gentian flowers in a hotel room in Bavaria.

Reach me a gentian, give me a torch!
Let me guide myself with the blue forked torch of this flower
down the darker and darker stairs, where the blue is darkened on blueness

Lawrence had no training as a painter but enjoyed making his own paintings, initially watercolours. He began painting enthusiastically in oils following a gift of blank canvases in 1926. In July 1929, he exhibited a one man show at the Warren Gallery in London. The gallery was raided by the police; thirteen paintings and copies of a book of reproductions were confiscated. A particular objection was Lawrence’s portrayal of nudity, especially the showing of pubic hair.

Lawrence’s work is not only about the natural world, human relationships, class, politics, modern and past societies, travel and sex, it is also about universal issues of how to live, and how to die. Lawrence struggled with his critics and opponents, but also his own demons and for the last few years of his life, his health and impending death. He remained creative, working until very near the end of his life.

On 1st March 1930, on Lawrence’s insistence, he was discharged from the Sanatorium in Vence, South of France. He died at about 10.15 pm in a rented house in Vence the following night, 2nd March 1930.

Joe Nicholas teaches at Hereford Sixth Form College. He studied Lawrence's Selected Essays for A Level English Literature, Lawrence's novels while an undergraduate at Swansea University, and has taught the appreciation of D H Lawrence's Selected Poems for the International Baccalaureate.

Selected Short Stories Teaching Pack
A comprehensive collection of study commentaries and thought-provoking questions on all 10 DH Lawrence short stories prescribed for the AQA B lit Unit 1. Includes all you need to get started teaching this new selection for AQA B Lit Unit 1, including practice exam questions!