Ken Kesey was born in La Junta, Colorado in 1935. The state with which he fell in love and in which he lived for most of his life, however, was Oregon, where his family moved to when he was eleven years old. Kesey’s parents were both hard-working dairy farmers, and their labour-intensive work was perhaps the reason for the two things which Kesey excelled at during high school: football and wrestling. Admired by his peers for his sporting prowess, he was voted in his high school yearbook as ‘most likely to succeed’.

After being awarded a wrestling scholarship to study Journalism and Communication at the University of Oregon, Kesey married his high-school sweetheart, Faye Haxby, and eloped with her briefly. Kesey would return to complete his degree in 1957, and he and Faye would remain married for Kesey’s entire life.

While studying at Oregon, Kesey made a few abortive attempts at writing a novel. The remains of one effort, however, were submitted by Kesey as part of an application to the Stanford Creative Writing Program, into which he was accepted in 1958. He clashed repeatedly with the course director, famed writer and environmentalist Wallace Stegner, but remained undeterred and continued to hone his style.

The two pivotal moments in Kesey’s writing career, however, were to happen outside the writers’ workshop. The first was Kesey’s paid participation in a US Army experiment testing the effects of hallucinogenic drugs, including LSD and mescalin. The second and perhaps more significant event was the job Kesey took working the night shift at a psychiatric hospital in California while completing his stint at the writing program. Kesey’s experiences with the patients, whom he believed had been grossly misunderstood by a narrow-minded society, inspired the book for which he would become best known, One Flew over the Cuckoo’s Nest, which was published in 1962. The novel, about a psychiatric patient called McMurphy who is subjected to debilitating rounds of electroconvulsive shock therapy while institutionalised, was a critical and commercial success on publication and would cement Kesey’s reputation as a chronicler of the American counterculture.

In 1964 Kesey published his second novel, Sometimes a Great Notion, which was also a commercial hit but polarised critical responses despite Kesey’s belief that it was superior to his previous work. Later that year he rode across America on an old school bus with a group of friends whom he nicknamed the Merry Pranksters, armed with a film camera and a healthy stock of LSD. Largely ignorant of drug use at that time, the US police pulled over the Pranksters frequently during the journey but never arrested them.

Kesey did not always remain on the right side of the law, however. In 1966 he was imprisoned for six months for marijuana possession (having tried to fake his own suicide to evade the police) and, on his release, decided to move back up to his family ranch in Oregon for good. While he would never again hit the heights of One Flew over the Cuckoo’s Nest, he continued to write novels, short stories and essays, all of which found a solid and appreciative readership.

He was left grief-stricken by the death of his son Jed in a car accident in 1984, and a few years later his own health began to decline. He developed diabetes in 1992 before suffering a stroke in 1998, and his long battle with ill health culminated in an operation to remove a tumour from his liver in 2001. After complications with the surgery, Kesey died; he was 66 years old. His last piece had been written just two months before in the wake of the September 11th attacks. In it, he pleaded for mercy, kindness and an increased willingness to understand others of different races and ethnicities, just as he had done nearly half a century earlier for the institutionalised men and women of America.
Show / hide details 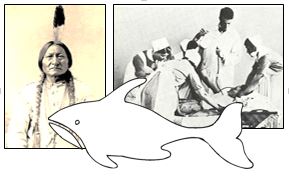 One Flew Over the Cuckoo's Nest: Comprehensive Guide for A Level AQA A (first teaching 2015)
Ready-to-use, detailed study notes guide your students through this fascinating text. It is sure to grip students: ensure they are equally engaged in their exam preparation with succinct analysis at just the right depth. A focus on the symbols used throughout the novel gives students plenty of close-reading prompts for their own work. Each pack tackles the key stages of text analysis. Plus! A glossary of key terms ensures full understanding.