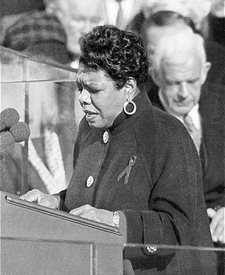 Maya Angelou was born in St Louis, Missouri on the 4th April 1928. Her given name was Marguerite Annie Johnson; she later took the name ‘Maya’ inspired by the way that her elder brother Bailey used to call her ‘my sister’. Following the break-up of her parents’ marriage, Maya (aged three) and her brother (aged four) were sent to Stamps, Arkansas to live with their paternal grandmother Annie Henderson. Maya and Bailey grew up at Annie's store for the next five years until their father appeared to take them back to St Louis to visit their mother when Maya was eight and Bailey nine. Although Maya and Bailey were initially enraptured by their beautiful, successful mother Vivian Baxter and the exciting city life in St Louis, the trip ultimately ended in tragedy when Maya was raped by her mother’s boyfriend Mr Freeman. Mr Freeman threatened to kill Bailey if Maya ever revealed what had happened but the rape nonetheless soon became family knowledge. Mr Freeman was beaten to death. Maya and Bailey were sent back to Stamps, but Maya was so horrified that her revelation had caused a death that she became a mute for the next five years until a family friend from Stamps named Mrs Flowers took an interest in her and introduced her to literature.

At age 14, Maya moved back to California to live with her mother where she attended Washington High School. She visited her father in southern California and Mexico for vacation but the trip ended in disaster when the already fraught relationship between herself and her father’s lover Dolores ended violently with Dolores stabbing her in the arm. Following this incident, Maya ran away and spent the summer living in a junkyard with other homeless teens, before ultimately calling her mother and asking her to fly her home. Back in Oakland, California, she battled severe prejudice and racial discrimination to become the first black female streetcar director in San Francisco before she graduated from school. Fascinated by men as an enigma, she became increasingly fixated on the mystery of sex, until aged 16. She gave birth to her son Clyde aged 17. Still not much more than a child herself, Angelou struggled to support her son. She flitted between many jobs to support herself financially: cook, barmaid, and dancer, all the while becoming more and more estranged from her son.

In the early 1950s, Angelou’s career as a dancer and performer started to take shape. Her popularity with audiences and innate charisma accelerated her career from strength to strength, until she eventually became as successful as to star in a European tour of George Gershwin’s Porgy and Bess. She married Tosh Angelos, an adopted variation of his surname becoming her surname for life. However, she and Angelos divorced in the late 1950s. Following the divorce, she moved to New York where her career as an actress flourished. She also became an active member of New York City’s literary and political scene. She became Northern Coordinator of the Southern Christian Leadership Conference (SCLC) between 1959 and 1960 after she organised a fundraiser in support of Martin Luther King.

In 1961, Angelou met and fell in love with a South African freedom fighter named Vusumzi Make. She and Clyde (who changed his name to Guy Johnson) moved to Cairo with him, where Angelou became an editor of the only English-language weekly newspaper in the Middle East: The Arab Observer. When her relationship with Make ended in 1962 she moved to Ghana with her son, working as an assistant administrator of the School of Music and Drama at the University of Ghana. She also contributed freelance writing to The Ghanaian Times and became involved in writing and broadcasting at Radio Ghana. She met and befriended Malcolm X on his visit to Africa in the 1960s. She moved back to the USA in 1965, helping him to set up the Organization of Afro-American Unity: a new civil rights movement created with a view to promoting equality for African Americans and to encourage cooperation and support on an internal level in this community. However, Malcolm X was tragically assassinated not long after establishing the organisation, leaving Angelou distraught. She moved to be with Bailey in Hawaii before returning to Los Angeles to work on her writing. In 1968, she was asked to organise a march by Martin Luther King, but tragedy struck again when he was assassinated before she could participate, leaving Angelou heartbroken once more. However, her friend James Baldwin managed to coerce her out of her depression, and she became intensely productive. She wrote and produced a 10-part documentary called Blacks, Blues, Black!, exploring the connection between blues music and African American heritage. She also wrote I Know Why the Caged Bird Sings, the first volume of her collection of autobiographies. This was published by Random House in 1969 and propelled her into international fame and critical acclaim.

In 1972, Angelou wrote the script and soundtrack for a film called Georgia Georgia,the first screenplay to be written by a black woman. She started composing for Roberta Flack and writing reams of short stories, television scripts and poems, all the while producing further volumes of autobiography. She was married to Germaine Greer’s ex-husband Paul du Feu from 1971 to 1983, and she also met Oprah Winfrey, who became a lifelong close friend and confidante. In 1973, she was nominated for a Tony award for her role in Look Away and, alongside this, was awarded over 30 honorary degrees and visiting professorships from universities all over the world.

In 1993, Angelou became the first poet since Robert Frost to speak at a presidential inauguration when she read her poem ‘On the Pulse of the Morning’ at Bill Clinton’s inauguration ceremony at his request. She completed the final volume of her autobiography, A Song Flung up to Heaven, in 2002. She took an active role in campaigning for Hilary Clinton in the presidential primaries of 2008. However, when Barack Obama became leader of the Democrats, she nonetheless gave him her full support. In 2011, Obama presented her with the presidential freedom medal, an award which commends those who make ‘an especially meritorious contribution to the security or national interests of the United States, world peace, cultural or other significant public or private endeavours’. Currently, Angelou is still a very active writer, lecturer and activist with active Facebook and Twitter accounts to keep her fans updated on her appearances and work. 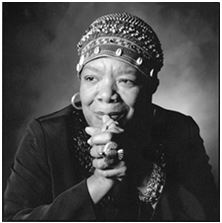 Maya Angelou: And Still I Rise Poem Commentaries for A Level
Clear and concise commentaries, comprehension activities and talking points on all 30 poems within this collection.